..”unbroken lovelines, this is, perhaps the sweetest stretch of all the river.”  Three Men in a Boat, Jerome K. Jerome.

Itching to get away from my desk and take a walk to enjoy a warm autumnal afternoon, it was a tweet that spurred me into action to head over to Cliveden Reach, between Cookham and Boulter’s locks, the fabled stretch along the River Thames.

I have visited the formal gardens at Cliveden, but that is only a small part of the vast 375-acre estate on the banks of the River Thames. I struck out from the Woodland car park and was soon enjoying the magnificent lime-treed avenue that leads to Cliveden House, an ornate mansion that crowns an outlying Chilterns ridge by the hilltop village of Taplow, near the busy market town of Marlow. 40 metres above the river, Cliveden means “valley among cliffs” and refers to the dene (valley) which cuts through part of the estate, east of the house.  The site has been home to an earl, three countesses, two dukes, a Prince of Wales and the Viscounts Astor. And a particular scandal.

The woodlands were first laid out by Lord Orkney in the eighteenth century on what had been barren cliff-top; they were later much restocked by Bill Astor but suffered badly in the Great Storm of 1987, the same year a section of a California redwood was installed in the woods. At a modest 5.03 m across, it is the largest section of a Sequoia gigantea in the country.

The woodland is quiet, with paths leading off into the trees so I headed downhill towards the river along a steep footpath that had seen much use and repair over the years. I had to stop to enjoy the expansive views across the river to Berkshire, opening up each week as the leaf cover falls away.

..”unbroken lovelines, this is, perhaps the sweetest stretch of all the river Thames.”  Three Men in a Boat, Jerome K. Jerome.

I passed the infamous Spring cottage, awarded Grade ll listed status in 1986 and in 1997 the hotel company which leased Cliveden House from the National Trust also acquired the lease to the cottage. A small fortune was spent restoring and refurbishing the dilapidated building before it reopened in 1998 as a self-contained luxury let. Luxurious it may be, but it is hardly private with the path passing within feet of the building, hampers and cottage life visible through the windows. One of four structures that was built in 1813, it saw many uses by the family and their guests, until in 1957, the cottage was leased by Stephen Ward for use as a weekend retreat and party house. Christine Keeler and Mandy Rice-Davis stayed here, with a chance encounter in 1961 between Christine Keeler and John Profumo at the now infamous Cliveden swimming pool, led to the so-called Profumo Affair that almost brought down a government.

The path then opens up onto a sunny riverside lawn, with another cottage, boathouse, small jetty and 171 steps up to the Parterre in front of the house. No dogs allowed! I don’t mind, it’s more informal here, in fact a good place to spread out and relax on the lawn. The Victorian boathouse has undergone extensive repairs, and you can see recorded on the brick wall a the entrance, historical flood levels. Choose to cool off in the river, on the Thames or alongside.

If it hadn’t been for this couple quietly enjoying the sweetest Thames view from their bench, I would have missed the best view of all! 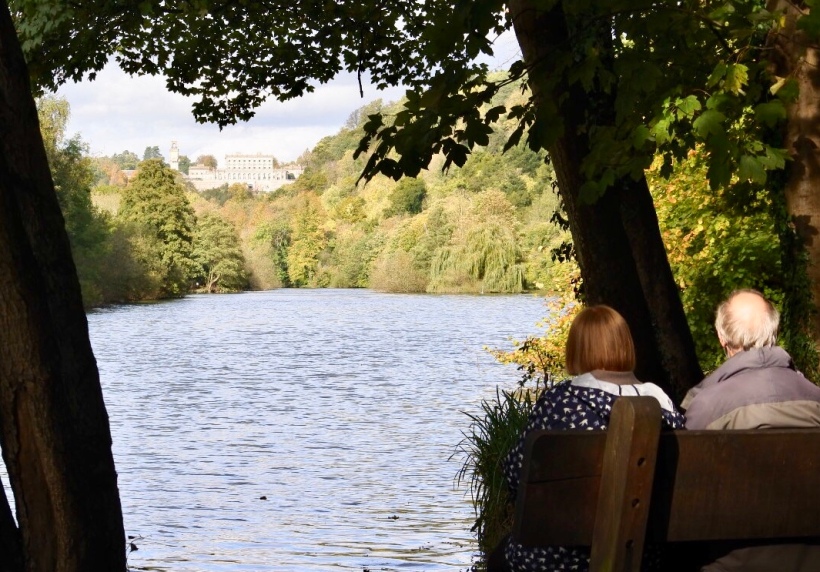 Visit the beautiful Rose Garden at Cliveden, although I expect it’s much changed from when I visited.

For further information on what to see and do in the lovely Chilterns VisitChilterns.co.uk or to spend time on the water at Cliveden.

Short break escapes: relax and stay by the river at Ferry Cottage. A hot July afternoon beside the river Thames at Marlow is always to be savoured. Panting dogs, bored children, enthusiastic pensioners, white linen-clad ladies, zoom lenses and bulging picnic hampers in evidence. We are gathered to see HM Queen’s procession of Swan Uppers!

England is full of quaint customs, some funny and others frankly bizarre.

Some with origins lost or simply re-invigorated to suit modern tastes and bank holidays. Swan Upping is neither. Firmly routed in the 12th century, it is both necessary for conservation of mute swans and acts as a gentle reminder of just who owns them.

A hot July afternoon beside the river Thames at Marlow is always to be savoured. Panting dogs, bored children, enthusiastic pensioners, white linen-clad ladies, zoom lenses and bulging picnic hampers in evidence. We are gathered to see HM Queen’s procession of Swan Uppers make their way upriver on their five-day journey from Sunbury to Abingdon Bridge in the counties of Middlesex, Surrey, Buckinghamshire, Berkshire and Oxfordshire to record the swan population on the River Thames.

This historic ceremony dates from the twelfth century, when the Crown claimed ownership of all mute swans – especially the cygnets,  a prized dish at banquets and feasts. As with the deer from the great parks and forests, punishment for poaching Crown property was harsh, punishable by death by hanging. No longer eaten, today the Crown retains the right to ownership of all unmarked mute swans in open water, but The Queen only exercises her ownership on certain stretches of the Thames and its surrounding tributaries. This ownership is shared with the Worshipful Company of Vintners, one of the “Great Twelve” livery companies of London, and the Worshipful Company of Dyers, who were granted rights of ownership by the Crown in the fifteenth century.

The Queen’s Swan Uppers wear traditional scarlet uniforms and each boat flies their flags and pennants.  On passing Windsor Castle, the rowers stand to attention in their boat with oars raised and salute “Her Majesty The Queen, Seigneur of the Swans”. With a cry of “All up!” the signal is given for the boats to get into position. Once rounded up on the water, the birds are taken ashore to be weighed and measured to obtain estimates of growth rate and the birds are examined for any sign of injury commonly caused by fishing hooks and line.

A traditionalist at heart, I love seeing ceremonies re-purposed to chime with contemporary life. Never mind the Swan Uppers!

VisitChilterns.co.uk has further information about accommodation, transport links and our fabulous market towns.

Cliveden Reach, between Cookham and Boulter’s Locks, the fabled stretch along the River Thames is worth packing a picnic for.

Further Marlow tales of contradiction, cruelty and the absurd; of a young ‘fanciful child of nature’ George Alexander Gratton, bought by a showman to exhibit to the public until his death and lavish funeral in a shared vault in a church in Marlow.

Messing about in boats is a favourite pastime and the Chilterns is busy throughout the year with visitors, locals and sports men and women on and in the River Thames.